Low-temperature cooking often has the characteristics of low temperatures, little salt, a little oil, and less smoke. Today, when low-carbon and healthy diets are advocated, this method can better meet people’s needs for environmental protection and health preservation. Less oil and salt can effectively reduce the incidence of cardiovascular and cerebrovascular diseases, which is conducive to a healthy diet, and can also preserve the nutrients of the ingredients. Low-temperature cooking is also characterized by low costs. Delicious food can be cooked by using constant temperature water bath equipment and a vacuum packaging machine, which is conducive to saving energy and promoting healthy eating. 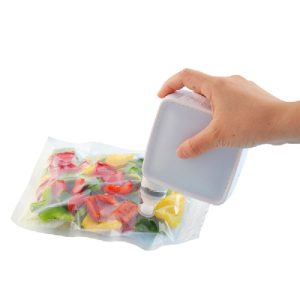 Isolating the air to prevent food from being contaminated by bacteria
Low-temperature cooking generally places the food in a sealed bag, and then puts the sealed bag into a sous-vide cooker. The food does not come into direct contact with water and air, which can prevent bacteria and microorganisms in water and air from entering the food, effectively prevent food from being contaminated by microorganisms and bacteria. At the same time, vacuum-packed food has a longer shelf life after being cooked, which is conducive to the hygiene and safety of food and prolongs the storage time.

Low-temperature cooking effectively reducing harmful substances
Low-temperature cooking effectively reduces the production of harmful substances mainly in two aspects. ① In the cooking process, there is less oil and smoke, almost none. ② Low-temperature cooking can effectively protect the molecular structure of high-protein foods such as meat, fish and shrimp, and effectively retain their nutrients. In the cooking method containing a lot of oil, a large number of oil fumes will be produced after the food being in contact with the oil, and will cause harm to the human body after inhalation; the oil fume will especially have an important impact on the human respiratory tract. In addition, if food is cooked at high temperatures for a long time, it will not only lose a lot of nutrients, but also change the molecular structure of the food and produce harmful substances, for example, barbecue. Some diners like to eat scorched barbecued meat. The scorched food indicates that its molecular structure and nutrients have been destroyed, and it contains carcinogenic substances. Long-term use of such foods is not conducive to human health. Studies have shown that eating fried foods for a long time will not only lead to obesity, but also cause damage to the esophagus, and even cancer in severe cases. The low-temperature cooking will not generate these harmful substances, and the whole cooking process will not generate a lot of oil fumes. The food cooked at low temperatures pays attention to the original taste, and the molecular structure of the food is protected to the greatest extent.

Conclusion
As we all know, China has been a fine food country since ancient times. The “eight major cuisines” are famous all over the world, and there are many kinds of dishes, which reflects the ancient people’s continuous exploration of food cooking skills. In the process of food cooking, people constantly sum up experience and create various cooking methods such as frying, roasting, frying, boiling and steaming. The application of these methods is mainly to select the cooking method according to the characteristics of the ingredients, and at the same time strive to ensure the original taste and nutrition of the ingredients, so that the food is more delicious and healthier. With the progress of society, people not only innovate the way of cooking food, but also pay more attention to a healthy diet. Therefore, low-temperature cooking has become a new fashion for a healthy life. The harmful microorganisms in the food can be killed and the beneficial part in the food will not be destroyed, taking into account the taste and nutrition of the food. Compared with the traditional cooking methods that only rely on personal subjective experience to judge the doneness of food, low-temperature cooking is more scientific and rigorous, and it is easier for ordinary people to grasp. Continuously improve cooking skills to ensure that food reaches standards of being healthy and delicious.

View all posts by Jeawin Huang →