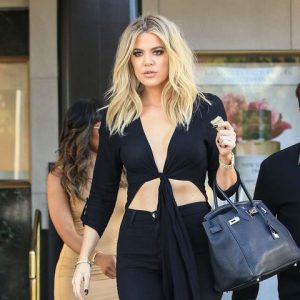 Up until now, the name of the son of Khloe Kardashian has not been revealed but during the November 24 episode of The Kardashians, Kim Kardashian was seen in a preview asking her sister for an update.

The SKIMS founder asked, “What are we gonna name him? That’s what I need to know.” The baby boy belongs to Khloe and Tristan Thompson.

Although the teaser did not show Khloe’s response, the reality star, who also shares daughter True, 4, with Tristan had previously hinted that her son’s name was “going to start with a T.”

In the season two premiere which aired on September 22, she said, “That’s really the only name I’ve been looking at.”

Back in July, a rep for Khloe confirmed to E! News that she and the NBA player were expecting their second child together via surrogacy.

“We can confirm True will have a sibling who was conceived in November,” the rep noted in a statement. “Khloe is incredibly grateful to the extraordinary surrogate for such a beautiful blessing. We’d like to ask for kindness and privacy so that Khloe can focus on her family.”

The couple confirmed in August that they had welcomed their son who was born on July 28. However, their son’s name was not revealed.

Khloe talked about her surrogacy journey on The Kardashians in which she also shared about her romantic fallout with Tristan following his December paternity suit drama.

In a December paternity suit, Maralee Nichols said that Tristan fathered her newborn son Theo, who is now 11 months old.

The NBA star rekindled his romance with Khloe prior to Maralee’s filing. He went on to confirm that he was Theo’s father.

“I take full responsibility for my actions,” he wrote on his Instagram Story on January 3. “Now that paternity has been established I look forward to amicably raising our son. I sincerely apologise to everyone I’ve hurt or disappointed throughout this ordeal both publicly and privately.”

Despite Khloe calling it “the strangest, most f–ked up situation,” she was ultimately thrilled when her tristan thompson baby boy was born. “Now that my son is here, I get to move on,” she said. “I get to move on and I get to enjoy myself. It’s almost like I get to close that chapter and be done with this trauma.”

The opening of Season 2 of The Kardashians showed Khloe welcoming her second child while the preview for the following week’s Season 2 finale teases the baby’s name may be revealed.

The second episode revealed that the season premiere was actually shot AFTER the rest of the season, though it seems the Season 2 finale will catch up to the premiere.

The teaser showed Khloe cuddling with her newborn son with Kris Jenner and Kim Kardashian.

Kris reveals that a, ‘new baby in the family is magic,’ adding, ‘He’s such a blessing,’ as Kris and Kim are seen doting over the newborn with Khloe.

In early December, Thompson’s paternity scandal was first revealed by DailyMail.com with Kim’s reaction to the report showcased at the end of Season 1. Thompson had a child with Maralee while he was still seeing Khloe.

He also ‘insisted’ that she get an abortion and offered her $75,000 in hush money… before she filed a paternity lawsuit.

Khloe revealed in the second episode of Season 2 – which was filmed in February – that Tristan actually proposed to her but she turned him down.

Khloe told Kim, ‘I said I need to make sure this is a totally different relationship because I want to say I’m proud to be engaged to anyone.’

‘That’s why I said, “I’m not comfortable accepting this right now because I’m not excited to tell my family,”‘ Khloe explained.

‘And as sure as that was probably hurtful for him to hear, it was the truth. I’m not ever gonna accept something and give someone false hope, and that’s what I told him,’ Khloe tells Kim.

Kim adds in confession, ‘Ooof, I don’t know. If someone asks me I would just have to say yes. I’d feel so bad.’

Kim adds that she knows it’s ‘super draining’ and she’s sorry and she doesn’t deserve this because she is, ‘the best person.’

View all posts by The Independent →

Why Do Gentlemen Date a High-End Escort in NYC?

How to build a fashion accessories store online?